Posted by dylangleeson on October 21, 2012 in Menu |One Comment

If I was to sum up my 2012 season with one word it would have to be WOW!  Wow it flew by so fast, wow I just crushed my first ironman, wow this year totally exceeded expectations, wow there’s no time for anything else when you work 40+ hours a week and train 20+ hours a week, wow I wouldn’t trade this for anything in the world.  Though the season definitely had its share of ups, it didn’t start out that way.  Part way through February, after noticing my training was going downhill fast, I had some blood tests done and found out I had mono.  “What?!  Mono, I haven’t heard of anyone having mono since high school.”  Lucky for me my wife isn’t the distrusting type, but unlucky for me it meant two months on the couch.  I can handle not doing anything for a couple weeks, but a couple months, that was definitely a down time for me.

After getting the go ahead to start training again midway through April I was able to start building back slow.  This didn’t leave a lot of time before my first couple of races, but we managed to get in some solid base work.  My first race of the season was the North Shore Sprint.  It’s not the most scenic course by any means, especially when it’s clouded over and raining like it did this year, but it’s an awesome way to kick off the season.  I had a subpar swim in the race, made up for it on the bike and pulled off a decent run split.  Needless to say I was pretty stoked when I found out I was the 1st amateur overall and broke an hour.  Not bad considering the circumstances leading up. 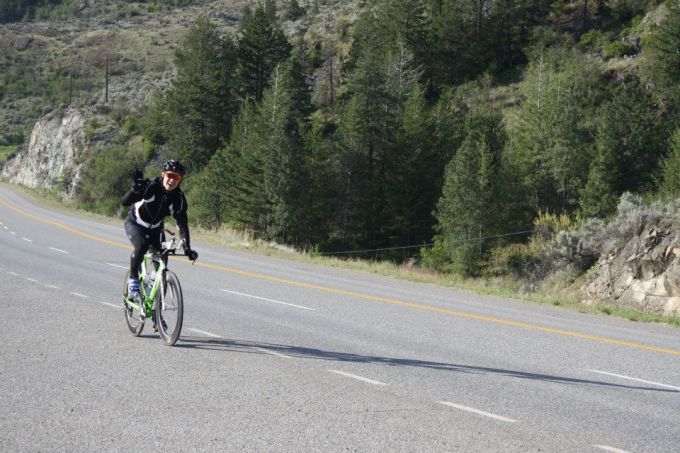 Next race on the schedule: the Oliver Half.  If you haven’t had the opportunity to race here, what are you waiting for?!  The Oliver course is amazing, though it’s long, the bike and run course are pretty fast, the scenery is amazing and the wineries for après race are second to none.  Going in to the race I didn’t know what to expect, I had a finishing time in mind but I didn’t know how realistic it would be considering I had missed 2 months of training.  I did what I could in the swim to try and get with the lead pack but it wasn’t to be, maybe next year.  When I came out of the water the clock read 42 minutes, “I know the swim felt long but that’s at least three minutes slower than last year, I could have sworn I invested countless hours in the pool over the last 12 months trying to improve.”  I decided at this point to erase that from my memory and worry about the bike leg ahead.  I’d later find out that the clock was 7 minutes off. 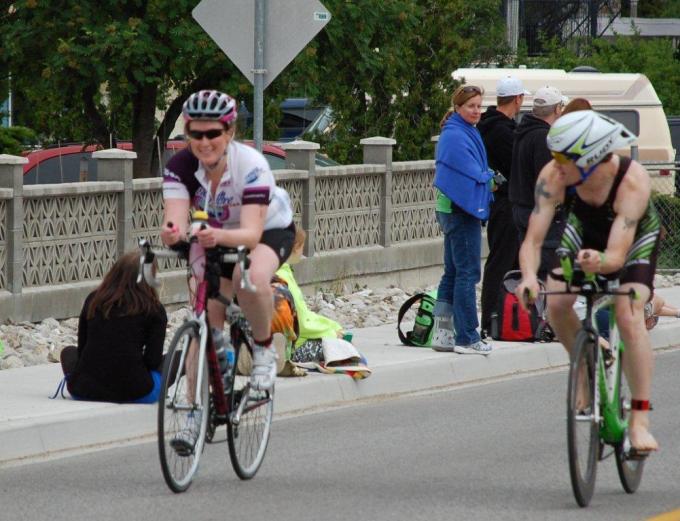 There’s nothing more encouraging than racing with friends

The bike felt great the whole way, I dropped the hammer “conservatively” from the start and started making my way through the pack.  When I rolled out of T2 I heard Steve King say I was in 2nd place.  This was a bit confusing for me.  Someone was running up behind me at the time and they confirmed; there was only one guy ahead.  How did I react to this news, shear panic!  In my first year of racing in 2011 I was nowhere near a position like this.  Being the stats nerd that I am I knew how fast I could expect some of the guys behind me to be running, a lot faster than me.  I ran scared for 8 km’s, hit the wall; then continued running scared for the remaining half marathon+.  I finished 6th overall and 3rd in my age group which I couldn’t be happier about; a vast improvement from 86th overall in 2011.  It was also a big day for my wife Jenna who absolutely rocked the race in her first attempt at the distance.  She paced herself far better than me and had a smile the whole day.  What more could I ask for. 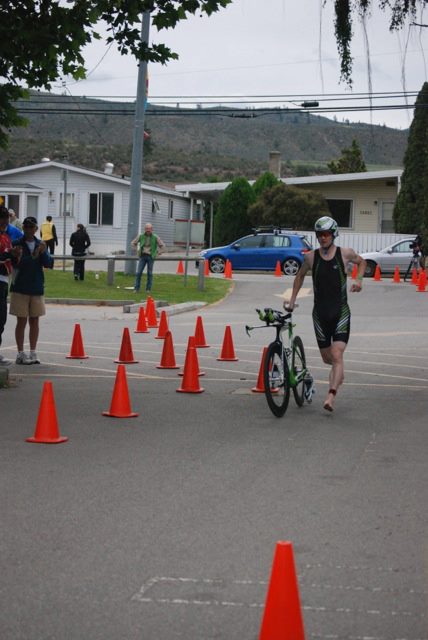 Fully unaware I was 30 seconds down from the lead

The Vancouver Half Ironman brought similar results, I finished 7th overall and 2nd in my age group, but more importantly I negative split my run which was a first.  All I can say is it feels one hundred times better starting a bit easy and finishing strong than it does the other way around.  What a difference.  Jenna also scored her first podium spot placing 3rd in her age group in the Olympic distance. 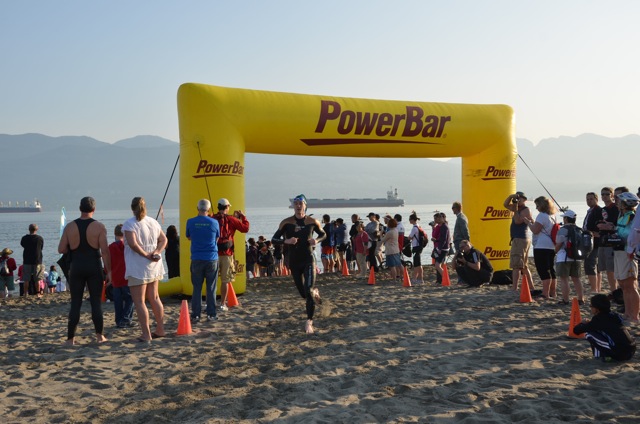 My fourth and final race of the season was Ironman Canada.  Without a doubt my greatest race experience to date.  Nothing really prepares you for what you have to demand out of yourself mentally and physically on that day.  I have so much to say about that race so it got its own post.   Though it was the most gruelling day of my life, for some sick reason I feel compelled to do more and that is what I intent to do in 2013 and the foreseeable future; as long as I can keep my wife and my body on the same page that is.  Jenna is all signed up for Challenge Penticton 2013 and I’m banking on her getting the bug and wanting to do at least another.

Looking back on the season the biggest things I learned are the importance of consistency, following a plan but most of all believing in yourself.  Once I was healthy again I made sure to make every training session and finish it in its entirety as I knew come race day if I had skipped some workouts, dogged it in others I’d find myself not necessarily being less fit but more importantly having self-doubts.  Following the plan is something I intended to do from the beginning of the year.  I started getting coached by Sean Clark and Tara-Lee Marshall at the beginning of the year and I made a decision at that point to buy into their training plan and racing plans for me 100%.  The results were much greater than I could’ve anticipated.

Now as cheesy as “believing in yourself” sounds; I couldn’t stress its importance more.  This isn’t something that came easily to me.  It’s something I struggled with in sports all through my youth.  I think what’s changed is as I have got older and matured I’ve realized if I put in the work required to get the result….. Then “why not me?”  I started visualizing success on race day rather than things going wrong and it gave me the confidence to stick to the race plan rather than second guessing and making poor decisions.  This inevitably led to some improving race results and my confidence started to snowball after that.

I’m convinced we all have this little voice buried in us; it quietly whispers these dreams we have for ourselves.  We have a tendency to tell this voice that these dreams are unrealistic, “I’m not talented enough, I’m not smart enough, a dream like that doesn’t happen to someone like me.”  This voice started getting louder this year and it got me thinking maybe rather than telling it to tone it down, maybe I should listen.  Though they may seem far-fetched to others and way out of reach I’ve decided to listen to this voice and turn those dreams in to goals.

I’m really excited about what 2013 will bring.  We can never know for sure how things will work out, but either way it’s going to be an adventure finding out.  I CAN’T WAIT!