Posted by dylangleeson on June 21, 2013 in Menu |No Comments

Since my last blog post life has been a bit of a blur.  Over a five week period I will have fit in a training camp, a sprint triathlon, a half Ironman and an Ironman.  It’s become quite apparent that race season is upon us and it’s in full swing.  At the end of last month we had the North Shore Sprint; timing wasn’t great this year as it fell a day after our Oliver training camp with Canwi Multisport.  I wasn’t sure how my body would respond after three long days of riding plus some travel time. 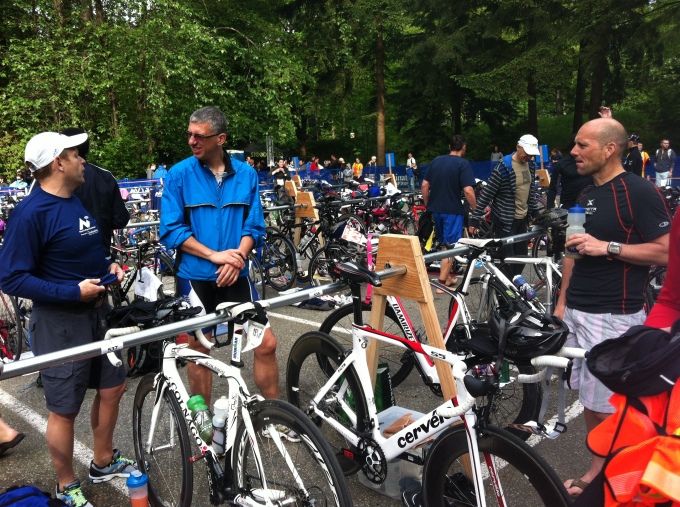 The race itself is awesome.  It has a great community feel with great organization, fantastic volunteers and it’s the perfect opportunity for first timers to toe the line at a triathlon or for seasoned vet’s to get some of the butterflies out before their first big race of the season.  Two years ago this is where Jenna and I did our first triathlon so we have a soft spot for this race.  It’s also a favourite as there are always so many familiar faces with it being on the north shore.

Race day went well to say the least.  I enjoyed the new swim format once I figured out how to navigate under the ropes at the wall.  I had a solid bike and managed to keep the legs moving fast enough to win the race by a small margin of 5 seconds over Ryan Smiley.  Since it was a time trial format there was no real way of knowing where we were at.  I made sure I knew where Rob Eakin was at the beginning of the swim as he’s solid across all three disciplines and I knew I would need to really hurt if I was going to beat him to the finish line; however, I had no sense of who our other competition was in this race.  Turns out it was very competitive this year with five men finishing under an hour.  Last year I was the only amateur competitor to do that so it says a lot.

Ok, I know… total cheese ball picture but how many times do you get to do this?!

Jenna had a tougher day than me out there from the get go.  We attributed it to training camp and her low iron levels, something she’s been working on building back up, but when she called me the next day to let me know she was in the waiting room to get an emergency root canal things made much more sense.

Two weeks later was the Oliver Half Ironman.  I’m a big fan of racing in the Okanagan for the scenic riding, great food, wine and an ice cream destination that puts all other to shame.  Though the course is usually long, by long I mean longer than the stated 2000m Swim and longer than the stated 21.1 run course (this year by more than 1km), it is a fast course.  The bike is two and a half loops on a fast rolling well paved route.  The run course is mostly flat and includes some graded trail.  The usual concern for the race here is whether it will be hot on the run, this year the weather had other plans.  Winds were already blowing by the time we got to transition and by the time we were in the water white caps were starting to form.  I had a solid swim, improving from last year and coming out of the water much higher up in the rankings.  I leaped frogged half of the pack in transition and came out 9th onto the bike.

This is where the weather really took its toll with a steady headwind on one long side of the oval loop with crosswinds in other areas.  The tailwind on the other side didn’t come close to making up for it.  Though I didn’t have as strong of a day as I would have liked on the bike, my fitness on the bike is ahead of last year’s and I biked over 1 minute slower on the day.  The race was also very competitive this year, it included past winners of the race, a multiple Ironman champion, an Olympic medallist and some very strong up and coming athletes.  I came out of transition tied for 4th with Nathan Champness, very quickly I realized I wasn’t going to be staying with this guy as his run is his strength.  He’d end up with the fastest run split of the day by almost a minute.  Just up the road were Tom Evans, Nathan Killam and Axel Merckx.  Being an Accountant, I’m a stats nerd so I had an idea that I wouldn’t be running down Nathan Killam this year.  He had a solid day across the board and held on for the win.  I felt good on the first three quarters of the run and when things started feeling tough in the later stages I did what I needed to do to reel in Axel Merckx in the final 2 miles of the run.  I could see he was having a rough go of it at this point and he didn’t try to come with me when I passed.  Had he done a few more triathlons before this I believe it would have been a completely different story.  Obviously he had the fastest bike split by about 4 minutes but I couldn’t believe how strong his swim was.  He came out of the water in 14th place, pretty impressive for his first triathlon.

Jenna clearly staying more positive than me and having an awesome time despite what mother nature was throwing at her!

Overall I was very happy to place 3rd Overall against such a competitive group of guys on a tough day.  It gets me really motivated to see how I can race against these guys after another year of developing my bike, but more importantly my swim and run.  I feel very privileged to be able to compete at this level having only done the sport for a little over two years.  I don’t take it for granted for an instant and am dedicated to seeing where more hard work can take me.

Love this picture! – Ben keeping his cool on the run

I had many other friends out there racing on the day and I’m so proud of all of them for overcoming not only the conditions, the tough race distance, but also all of the other issues that they had to deal with individually.  Meagan had such serious quad cramps that people spectating could actually see it happening, she had to stop on both loops and massage them in order to keep going, I can’t imagine how painful that would have been, it could’ve been so much easier to drop out, but she kept going.  I can’t wait to see how she runs next race once she gets the cramping figured out.  My wife Jenna put me to shame taking almost 13 minutes off her time from last year and absolutely smashed the bike course in super tough conditions.  She went to the well in the last few miles of the run and couldn’t walk for about 30 minutes after she finished because her legs cramped so bad.  I absolutely LOVE it; this makes me feel like I need to toughen up and dig deeper next time.  Our friend Ben also completed his first half ironman and did so in style making it look effortless the whole way.  He was signed up for this race two years ago but couldn’t start when some serious health issues caused him to stop all training.  I know for the past two years all he’s been thinking about is being able to get back here to complete this race (a subtle hint is that he’s been to Kona to watch the race the last 3 or 4 Octobers!).  It’s overwhelming thinking of everything he’s had to overcome and I’m so happy for him.  I look forward to seeing him out on the race course in Penticton at the end of August when he takes on his first iron distance race.  There’s so many others out there that raced so I can’t mention them all, just thought I would give my roomies from race weekend shout outs as they inspire me to demand more out of myself and to keep pushing my boundaries every day.