Posted by dylangleeson on October 6, 2013 in Menu |One Comment

So it’s been pretty long overdue for a blog post.  I’ve been basking in the glory of off season for the last four weeks now.  I can honestly say I am officially out of shape; I call a 10k a long run, I wheeze at the top of stair cases, and I’ve put on a good 10lbs courtesy of multiple 600 calorie muffins and 850 calorie cinnamon buns (with icing!) from my favourite JJ Bean spot on Powell street.  Let’s just say the last four weeks have been a total success.  This season was a long one and with plans to race into early October next year I get the importance of giving my body the time off it needs at this time of year to fully recover from the training and racing I did and to fully recharge for another season.

As most of you know, I capped of my season at the Ironman 70.3 World Championships in Las Vegas earlier in September.  I can’t really say it was an “A” race as we didn’t train specifically for it, nor did it fit well into my current schedule.  It lined up two weeks after Challenge Penticton and we didn’t really have any idea how well my body would respond that soon after an iron-distance race.  It was more about taking the opportunity to race beside some of the best in the world and gain some experience for future races.  And let me tell you… it didn’t disappoint!

There was plenty to drool over at the expo but the new Felt IA took the cake. I may have put an order in for one of these bad boys and I may be EXTREMELY excited about it!

Jenna and I flew into Las Vegas Thursday night, well with the insane lightning storm Vancouver experienced that day shutting down the airport I should say we arrived in Las Vegas early Friday morning.  We decided to stay on the strip as it was my first time in Sin City, what a SCENE!  Jenna took me to a pool called the lazy river to grab a drink the day before the race, me being naïve assumed it would be a casual place to float around in tubes with a beer.  Turns out the scenario is straight out of a MTV music video with blaring club music, belligerent drunkenness and booty shaking, lots and lots of booty shaking!  Welcome to Vegas.

The race itself was held in Henderson which is about half an hour from the strip.  It was a scene in itself.  There was a Whole Foods a block away from T2 and it was clearly the Vegas version of Lava Java.  In less than five minutes we went from ordering teriyaki chicken bowls beside Ironman World Champion Leanda Cave, to lining up behind Luke Bell at the cashier to sitting across from this year’s 70.3 World Champion Melissa Hauschildt to eat our lunch.  Being the tri geeks that we’ve become, it was a pretty fun place to people watch.

T1 at the 70.3 World Championships. You think T1 at the Oliver Half is bad? This was much worse.  600m run dodging ankle breaking mud holes, followed by running through sand just to get to your bike.  Finishes running up a mini Mount Everest with you bike.

Race day Sunday morning was pretty routine, 330 am wake up to start getting ready.  What wasn’t routine was the weather that day.  When we left the hotel that morning it was already starting to pour rain, not what I was expecting.  I had been preparing for what I thought would be unforgiving 40 degree dry heat and the weather was turning into what you would expect to see at a Vancouver race in May or September.  The start format for Vegas was a wave format, normally this isn’t an issue for me because my wave usually starts next after the pros; however, the lake in Henderson can’t accommodate a large start so waves were broken down into individual age groups, ok still no issue.  Then I realize my wave starts second to last almost two hours after I have to be out of transition. LAME!  Not only did I have to wait for two hours before starting but I would also have to bike through all the other slower age groups that would start before us.  Adding the poor weather conditions to the mix, I knew it would make for a pretty hairy bike segment. 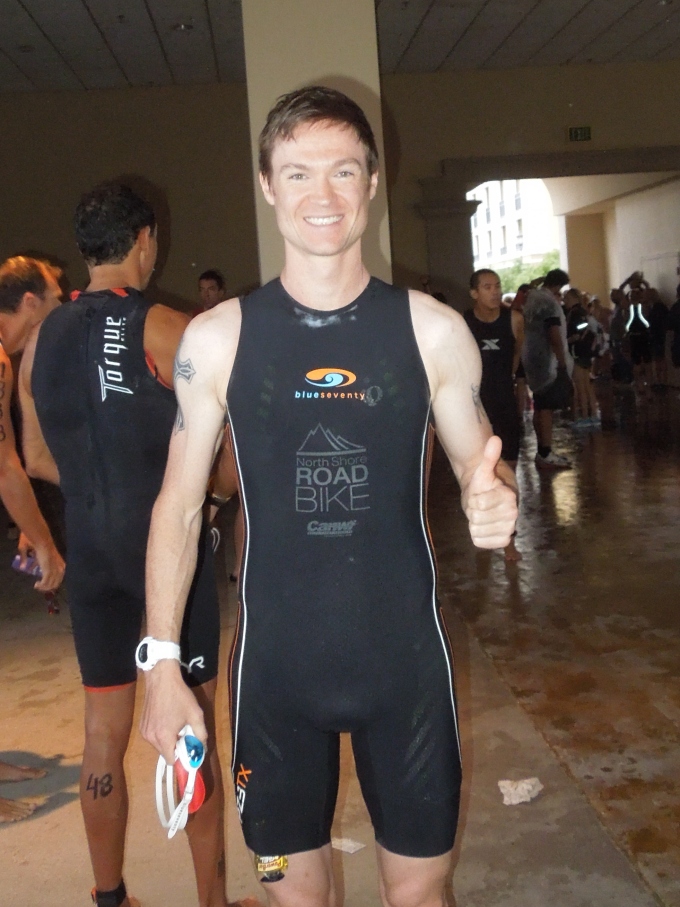 All ready for the non-wetsuit swim in my blueseventy PZ3TX swimskin.

After making sure to get a spot front row for the deep water start, I realized it was going to be a bit of a wait.  Within this time more and more people started creeping the start line (moving past it).  There were a couple guys trying to police this on paddle boards but with 30 seconds to go one guy actually aggressively shoved one of the paddle board volunteers away.  I was pretty stunned.  By then I had allowed myself to be overtaken a bit and I was now about two rows back.  Not where I wanted to be.  Gun went, we went, and it was on.   I wasn’t able to get on any good feet until about 800 metres in and by then it was clearly too late.  Looking back on the race I had a crap swim, missed the main pack and it probably cost me at least 2 minutes.  This isn’t a big deal in a regular race, but at a World Championships this can stack up to 5 spots in your age group alone.  I came out of the swim and Jenna’s encouragement was “Don’t worry, you can catch them on the bike!”  Not a good sign.  I knew I was far back at this point but never would’ve imagined I would be 66th out of the water. 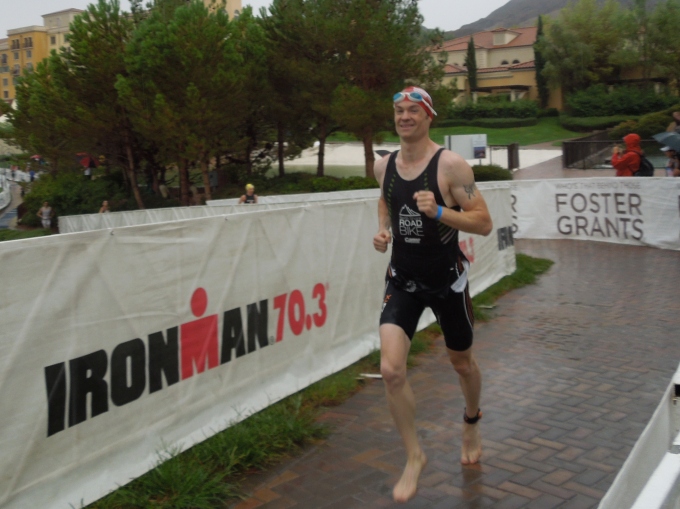 “What do you mean catch them on the bike? I’m not leading?!”

I went to work on the bike starting out conservative as it is a pretty hilly course.  Right away it was super congested; not only was it impossibly hard not to draft, it was hard not to run into someone.  5km’s in things opened up a little bit and once we made it into the national park I picked up the pace.  Nothing interesting to report about the bike, I spent most of it hugging the yellow line passing people and the amount of groups blatantly drafting was shameful.  One thing I will say before moving on, I was really happy to have a power meter on this course.  It was shocking watching guys and girls pushing big gears past me on the climbs, within seconds on the flats I would overtake them again.  People that flew by me in the early stages of the bike came back to me later in this segment as they were fading.  It really helped me efficiently pace the bike.  Not only that but I can take this data from the race and see how my power effort stacked up against races I did prior or in the future.

Going to work on the run. All 551ft in elevation gain of it!

Twenty minutes before I made it in to T2 the sun decided to come out and things quickly turned into a sauna.  I felt strong finishing the bike but as I made my way out on to the run, like the Calgary 70.3, I realized my legs weren’t fully there.  The run course was three loops, these loops each comprised of one big hill repeat.  How guys can run sub 1:15 half marathons on this course after absolutely blitzing that tough 90km’s bike course and going all out in the swim I don’t know, it blows my mind!  My plan for the run was to focus on running strong on the first two loops and absolutely emptying the tank on the third.  I’m proud to say I stuck to the plan, it wasn’t pretty, it wasn’t a PB, but I got everything out of my body on the run and with that comes a certain level of satisfaction, regardless of the result.

I finished the day 31st in my age group and 166th overall.  I had my sights set on a Top 10 but the honest truth is I had a good day, not a great day and with how incredibly competitive it was this year it would have been a stretch to make the Top 10 even had I forgone Challenge Penticton to solely focus on this race.  I’m happy we stuck to the plan and I walk away from this race learning a lot.  For one, you can never rely on the level of competition being consistent year to year at a particularly race and you certainly can’t expect to race a world championships and finish at the pointy end of the field without giving it 100% of your focus. 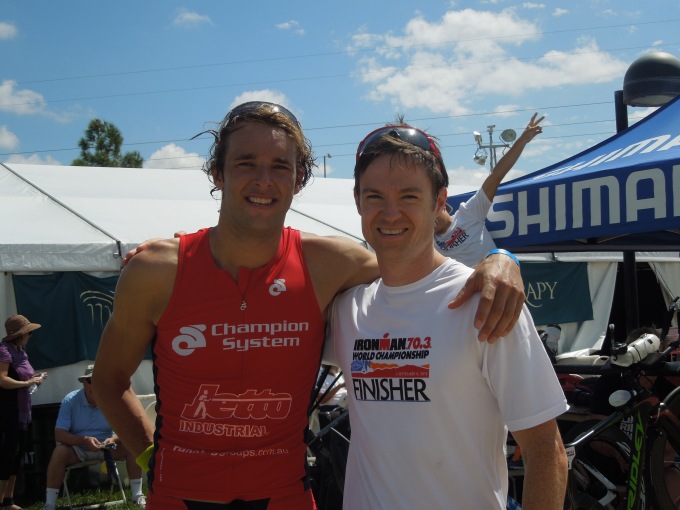 We met our new Kiwi friend, Shaun, and his now fiancee Ashley at the race. I may have beat him in the race but he totally kicked my ass on his marriage proposal. Check out the video below. Shaun you sly dog you! He did this on their stop in New York after the race and in a Batman t-shirt of all things… AWESOME!

A big thanks to all those that helped make this season such a success for me.  First and foremost my wife Jenna, my parents Bill and Cindy as well as my in laws Jan and Pete.  There’s so much support required behind the scenes when trying to juggle a full time job with training to race at this level or even just to successfully complete an Ironman.  A big thanks to Dave at North Shore Road Bike who has been very patient with me and done a fantastic job at covering all aspects on the equipment side of things for me.  Thanks to Sean and Tara-Lee for providing me with a coaching plan to get me to my races healthy and in a place to achieve my goals.

As you can already tell I’m fully embracing the off season.  I’ve been spending time running with my wife and friends.  I took part in my first Cyclocross race last weekend having a blast and my first big slam since selling my downhill bike a few years back.  It just feels good to take a step back, spend some time with friends and put the feet up with a case of beer without feeling guilty about it.  I have some incredibly big dreams that have become goals for next season but for the next couple of months I’m going to continue to sit back, celebrate the success that the 2013 season was and maybe shred some more cx races.  Hope to see you out there!