Posted by dylangleeson on October 26, 2014 in Gear Reviews |No Comments

More so than any other race I have competed it, I took quite a bit of consideration when selecting the gear I would race with in Hawaii.  Like I anticipated from everything I had heard, the conditions played a huge role on race day.  Picking the wrong wheel, for instance, could have made the ride even harder to handle than it already was.

First, getting to the race was a big deal.  When you decide your 17 year old truck is adequate for another 10 years so that you can invest that money into a bike instead it means two things: one – you have your priorities straight and two – there’s a certain amount of anxiety that comes with the thought of shipping that prized possession as cargo on an airplane.  I used a Biknd Helium bike bag to get my bike to and from the race as it’s an extremely well thought out bag that gives me piece of mind.  The bike frame locks into the base of the bag and there’s actually airbags that you fill with a hand pump that help protect up to two sets of wheels as well as your bike.  Everything arrived to and from Hawaii in perfect condition.  Stoked to have this bag as I have a feeling I’ll be using it a whole lot more next year.

I went with a one piece Sugoi Custom RSE Tri Suit.  I go for a one piece for a number of reasons: you don’t have the waist band digging into you, you also have better coverage from the sun.  For someone like me that’s always trying to figure out how not to get sun burnt on race day, it’s great not to have to worry about the gap above your tri shorts when riding on the bike for 4+ hours.  The fabric and chamois used in the Sugoi Custom gear is awesome and I never give it a second thought in a race which means it’s performing great.  The crew at Sugoi also did an amazing job of putting together a kit that really stands out, it makes picking me out in the crowd for family and friends easy.

For the bike I brought a second shallower front wheel to Kona with me courtesy of Dave at North Shore Road Bike.  I ended up going with this wheel on race day and I am so happy I did.  Race day ended up being one of the windiest they’ve had in the last several years and this decision definitely had an impact on my race.  The front wheel I used was an Enve SES 6.7 tubular (60mm).  My rear wheel was my usual Enve SES 8.9 tubular (95mm). 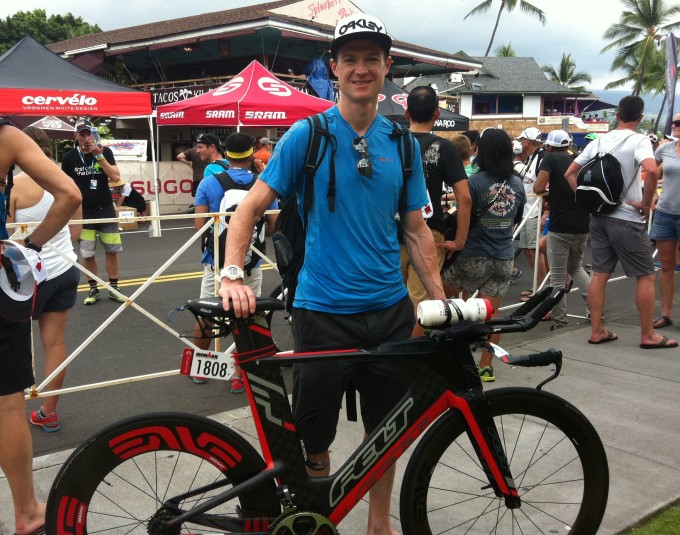 I chose the shallower Enve SES 6.7 front wheel (60mm)… if you consider that shallow

I wanted to use a helmet for race day that was super aero but also didn’t sacrifice ventilation.  I went with a Rudy Project Wing57.  The details on this helmet are insane.  I was really impressed when I saw it in person, it was incredibly comfortable and I never felt like I was overheating in my helmet during the race which is saying a lot in Kona.  It comes with a fantastic visor but I chose not to use it and wear sunglasses instead to avoid overheating.  If you have an opportunity to try one of these I definitely recommend it. 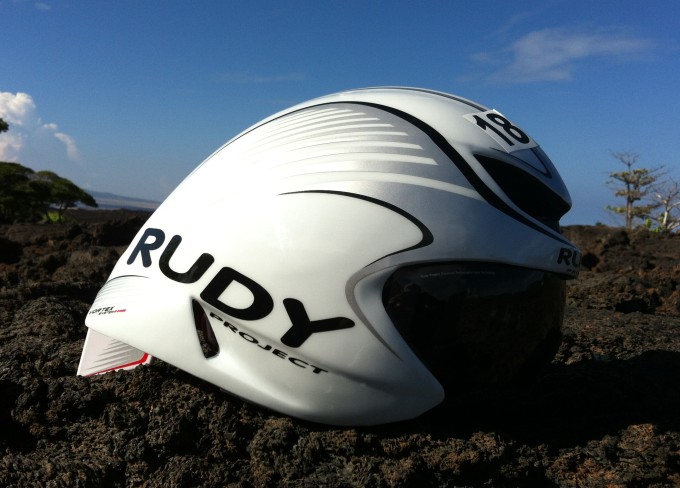 The sunglasses I went with for the bike were my Oakley Radarlock XL’s with photochromic lenses.  The huge benefit to using the XL’s in particular on the bike is the expanded field of view.  With most sunglasses, when I’m in the aero position on my bike my field of view can be obstructed by the frame, with these you don’t get that.  On the run I wore Oakley Radarlock’s with Red Iridium Polarized lenses; these were amazing for cutting out the glare which is a big factor running out in the Hawaiian sun all day.  Pre-race and post-race it was all about the Oakley Frogskins, these things are classic! 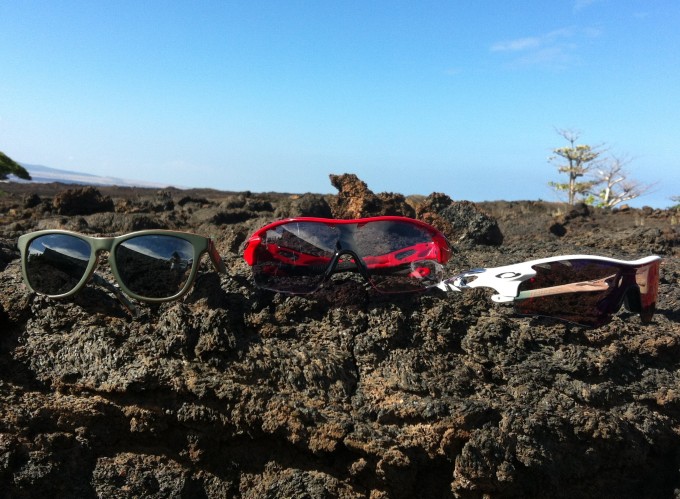 Another crucial element for the race was having the right headwear.  Jenna and I scoured Kona and came across this super rad trucker hat.  I think I’m going to have to add this to my race day and even training day repertoire.  The ventilation on the trucker hat was great, it’s super light and did an amazing job of keeping sweat off my face.  It also made me feel cool despite the fact I had spent the entire day running around in spandex!!

So there’s some of my essentials from race day.  If any of you have any questions about my gear choices from the day, don’t hesitate to ask!